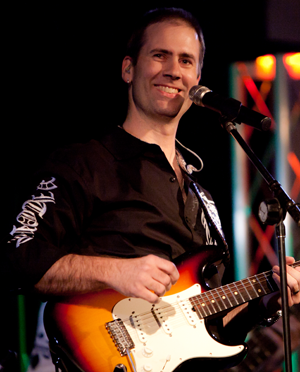 Have you ever wondered why you can’t make use out of many blues guitar lessons?

Not to say that they are bad… I mean they are fun to play for a while.

But in the end… can you actually play a cool song for a friend or jump up at an open blues jam any better than you could before?

So wouldn’t it be cool if someone would take all those little ideas that you learned 5-10 minutes at a time and showed you how to actually put them together?

And wouldn’t it be even better to know that once you learn how to put those pieces together, you’ll see how to put them together in dozens of different ways?

That, my friend, is the power of the blues when you play it the right way.

Because Blues music isn’t bound by too many “rules” like that mainstream garbage that always sounds the same.

Blues is a living, breathing music that changes and evolves all the time… when you hear Clapton play “Before You Accuse Me,” or “Drifting Blues” it won’t sound the same as it did the last time you heard it.

And it won’t sound the same the next time either – that’s the fun part of the blues.

What you probably already have are a bunch of tiny bits and pieces of the blues – a lick here, a chord or 2 there… maybe a cool blues rhythm or 2.

But you don’t have music yet…

You see, the Blues is like a puzzle… except instead of trying to make the picture on the box, you get to decide what the masterpiece is going to be in the end.

And that’s what I have for you… the keys to the kingdom so to speak.

It’s called Blues Gig In A Box and it’s like no set of “blues guitar lessons” you’ve ever seen. 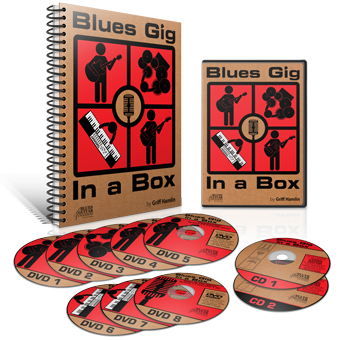 I mean, I’ve seen DVDs and online lessons where classic blues songs are broken down and taught… but there’s always one piece that’s missing…

“Why was it played that way?”

It’s all well and good to learn how to play a song note for note, but other than some technique practice you haven’t really made a lot of long-term growth.

But when you go through a song and have each chord choice, each scale pattern, each lick, each intro, and each ending broken down and explained in terms of why it was chosen… now you’re getting some really good long term experience.

And as much as we guitar teachers hate to admit it, experience is really the best teacher.

But experience takes a long time to acquire… so I’ve always said that my job is to guide you through the process of getting experience in the shortest amount of time possible.

In other words, instead of you beating your own head against the wall learning 100 songs so that you can start to see the patterns and the reasoning behind stuff… I’ve done all the leg work and put 5 tunes on a silver platter for you.

In the end, you’ll have the same amount of experience and the same result… but you’ll have a lot more fun and do it in a lot less time.

Plus, you get to do it with a slamming band behind you (mine) and not some cheesy computer tracks or home-made rhythm section.

Now that made this course considerably harder to make… but I’m sure you’ll agree the results were well worth it.

You can go through the tunes in any order you’d like… and the songs are divided into sections so you can learn them in bite-sized pieces (because that’s how you eat an elephant… one bite at a time.)

At the end of each section I play that section slowly and count the whole thing out so you can play along with me after you’ve learned the pieces.

And from there you have both a slow speed (about 80%) and full speed version of the entire song to play along with so you can accelerate your learning curve.

I’ve also provided versions in slow and full speed with no guitar so you can change things up and make them your own.

And of course every single note of all 5 songs s is painstakingly transcribed and is in the manual in TAB and standard notation.

Now how long it will take you to learn these 5 songs is impossible for me to say… but I can say that it’s amazing how just one little eye-opener in the very first song can really be a “game-changer” right off the bat.

And when you can just sit down with your guitar, turn on the band, hear the drummer count it in and just play along – well that’s a pretty great way to spend an afternoon.

Here Are The Tunes You’ll Be Playing…

I Got The
Blues

Down To The Depot

What Will Learning These 5 Songs Do For You?

Here's What You'll Be Getting...

Like I said before… the best thing you’ll get out of these 5 songs is experience that you’ll never forget. And that experience is worth more than anything because you get to lean on it from now until forever… it’s priceless

And if you think about how difficult and costly it would be to:

And as soon as you complete your order today, you can be playing the first tune within just a few minutes from your secure member area.

You can download the course to your computer, or you can access it via the internet and stream it. There is no waiting, no shipping charges, and I'll keep it safe on Amazon Cloud Servers for many years to come.

And if for any reason you aren’t totally thrilled with Blues Gig In A Box just let me know and I’ll give you a fast, friendly refund, no questions asked… and you don’t even have to send it back (maybe you have a friend who would like it.)

You have a full 90 days to check it out and put it through its paces. If it isn’t everything I said it would be I insist that you email me and let me give you your money back.

So Here’s What You Do Next…

Click the big yellow "Add To Cart" button in the box below. You'll immediately be sent to the checkout page where you will see your discount applied... there's nothing you need to do.

Once you've entered your information and completed the checkout, look for an email in just a few minutes with your membership access login details - it's that simple.

To get your complete copy of Blues Gig In A Box, just click the yellow “Add To Cart” button below. Just as soon as your order is complete you will receive an email with your access instructions to the secure Member Portal so you can literally be playing these tunes in just a few minutes from now! 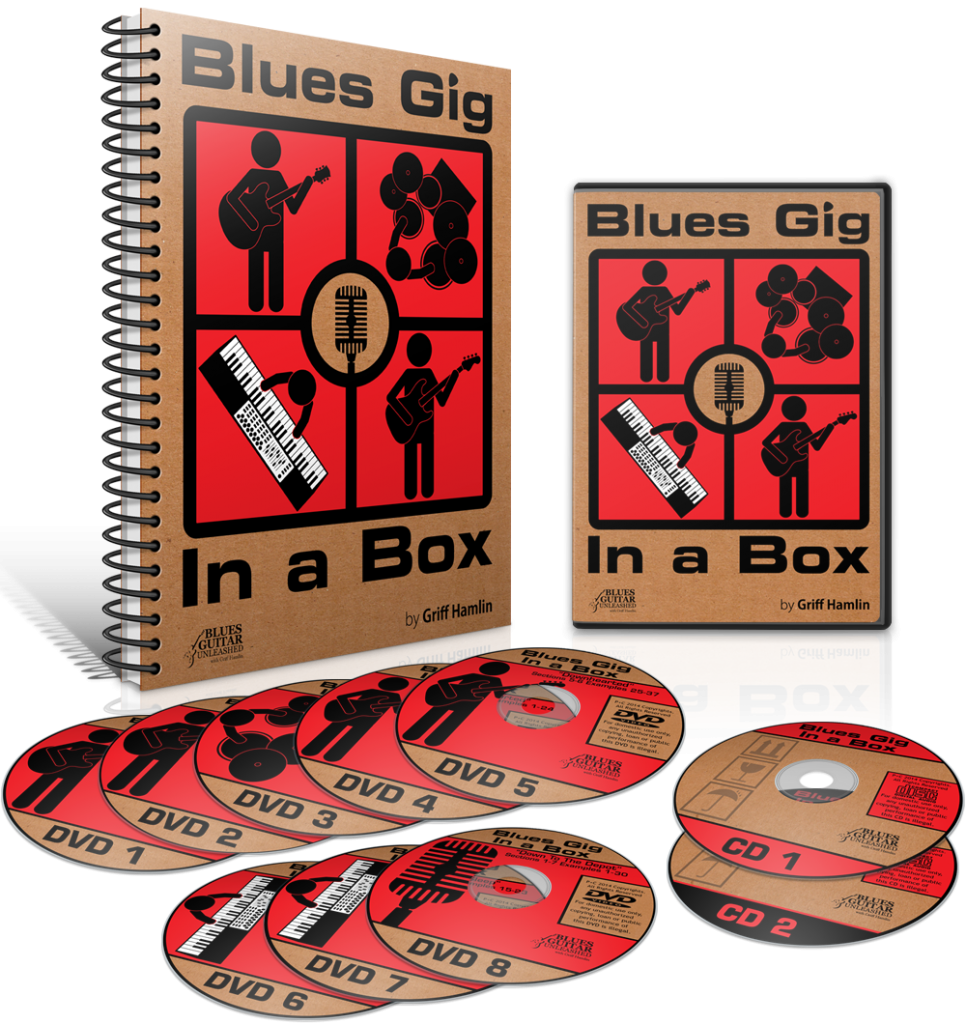 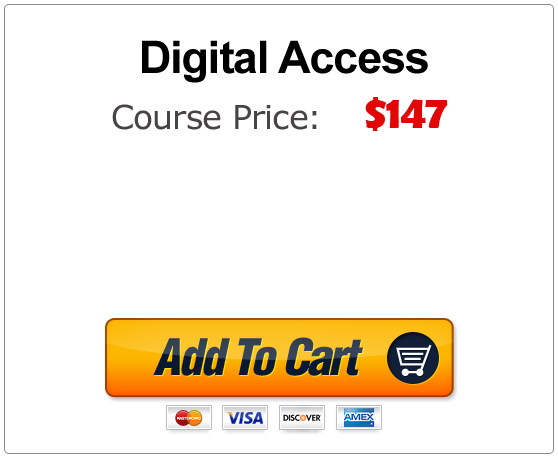 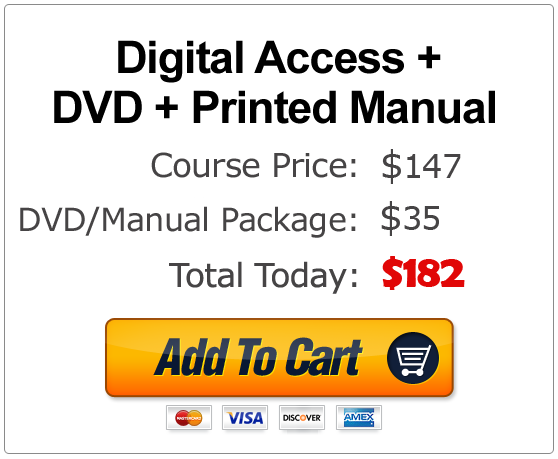 This is a one time payment, NOT a subscription. 3 Payment option is available on the next page.

This is good for you and will help you. There’s no reason to keep messing around with little bits and pieces of stuff. This is how to make real blues music on your guitar – music that you’ll want to listen to and enjoy and share.

So don’t wait and get your copy of Blues Gig In A Box today… and remember, you have a full 90 days to try Blues Gig In A Box and if you’re not totally happy with it just let us know and you’ll get a fast and friendly refund. And you don’t even have to send the course back… there’s truly no risk at all to you.